No, a knight cannot place a king in checkmate alone. There will always be a square for the king to escape to. This means that the game will result in a draw.

It is not impossible for a knight to checkmate a king, but this will be within a team. This strategy will require other pieces on the board to ensure that the opposing king is trapped, and cornered by the knight for a checkmate result.

I will be focusing on whether a lone knight can checkmate a lone opposing king. Meaning, there are no other pieces remaining on the board to assist the knight.

To kick off our discussion, I will start off by sharing why I love chess so much. Spoiler alert, because it’s a game for everyone.

I will also discuss how the knight and king move. And, of course, answer the mind boggling question in detail: can a king and a knight checkmate?

Get cozy and pull your checkered board closer, we’re chatting chess!

The Wonders of Chess

My friends often teased me (in a friendly way!) for continuing to play chess. However, I went to practice every Tuesday, because I just absolutely loved it.

My dad taught me chess at a young age, and I really wasn’t great. Even after playing chess for so many years, there was always someone better than me. Plus, the day still hasn’t come that I’ve beaten my dad. Although he did let me win a few times for a morality boost).

Then why continue? Well, to me, chess was always a safe space. I wasn’t the best in the team, but the team always supported me. We also had loads of fun traveling to different chess destinations.

A game of equals

Plus, in chess the playing field is equal. It doesn’t matter how strong or tall you are, or whether you’re skinny or a bit bigger. It doesn’t matter what you look like, what your name is or if you have money for the latest and greatest gear. It’s all about what’s in your mind; something we can always improve.

Chess will also always have a special place in my heart, because of all the chess tournaments my dad took me to, and the memories we made. One day, when I’m 80 and on the porch of an old age home, I know that I’ll (if my mind allows it) still be able to play chess and reflect on these memories fondly.

Anyway, that’s enough chess reminiscing for one blog, let’s get back to the topic at hand!

Sure, they couldn’t put Humpty together again, but there are plenty of other reasons why the noble knight is on the top of my favorite chess piece list. Yes I have a list and yes, the queen is the ruler of that list.

Dating back to Chaturanga from the 6th century, the knight’s movement has been left unchanged for centuries. That’s a good thing too, because there are few pieces who maneuvers as well as the good ol’ knight.

Each side of the chess board has two knights in its army. One flanks the queen to the right of the rook, while the other flanks the king to the left of the rook.

Traditionally, this piece is designed to look like a horse. This is likely why you’ll hear young chess players referring to the piece as a horse (or a perd in my home language, Afrikaans).

However, the  correct name for the piece is a knight. Just imagine that the horse can’t possibly go into battle alone, and that it needs a brave knight to guide it to the enemy lines.

How does the knight move?

The knight is unique because there is no other piece on the chess board that moves the way it does (is this how Mick Jagger feels?).

Can a knight jump over pieces?

You bet it can! This is why the noble knight is one of my very favorite pieces. No matter which piece the knight meets along its path, it can simply jumbo over them to get to its destination.

Can the knight move backward?

Yes, just as it moves forward in an L-shape, the knight can move backwards in the same way. This movement includes jumping over other pieces.

How does the knight capture?

The knight can jump over other pieces to get to its intended target, and captures the piece by replacing it on the square.

Now it’s time to introduce the piece that the entire game of chess revolves around, the oh-so-powerful king.

The purpose of chess is to protect your king at all costs. If the king can no longer move without the threat of being captured, the king is in checkmate and the game is over.

For this reason, kings are referred to as the most powerful pieces on the chessboard. Before moving the king, or any other piece for that matter, you must ask yourself: how will this benefit my strategy of protecting my king and attacking my opponent’s?

How does the king move?

Like a slow-moving elderly ruler, the king moves one square at a time. The king can move horizontally, vertically or diagonally in any direction, as long as it is only for one square.

Can the king move backward?

Yes, the king can move backward in any direction, as long as it is only for one square.

Related: Can a king take a king?

Although on the slow side, the king also has a trick up its sleeve known as castling. Together with the rook, the king can use this move to protect itself from opposing forces.

The king castles by moving two squares horizontally in the direction of either of the rooks. The rook then moves to the square that the king crossed.

This nifty move is only possible when:

As you probably know by now, chess has a term for just about everything. When a king castles to its right, this is known as kingside castling or short castling.

A king that opts to castle to its left, undertakes queenside castling or long castling.

How does the king capture?

The king captures in the same way that it moves, either vertically, horizontally or diagonally in any direction, for one move at a time.

When capturing a piece, the king will do so upon landing on the square of the intended target. The king can only capture a piece if he himself is in no danger of being placed in check or checkmate.

If a king is in check, the player must immediately move the king towards a safe position (within the move availability of the king). For example, the king cannot move two squares to avoid capture.

Related: Can a king capture a queen?

Can a king and a knight checkmate?

When an opposing king is alone on a chessboard, it can not be placed in checkmate by a lone knight. This move is impossible, as there are no other pieces to, essentially, trap the king into check. With no other pieces on the board, the king will always have at least one square to escape to, as the knight only moves in an L-shape.

When there are other pieces on the board to assist the knight in its battle against the king, the knight will be part of a group that places the king in checkmate. For example, the piece could be ranked by a rook and bishop, with a pawn and queen to assis.

However, the knight cannot place the king in checkmate on its own. How does the saying go? Teamwork makes the dream work!

Related: Can you checkmate with just two knights?

The knight has to work in a team if it hopes to put the king in checkmate, as it cannot do so on its own.

As there will be no other pieces to essentially trap the king in checkmate, it is impossible for a knight to  checkmate a king without the help of other pieces.

In this article, we discussed the moves of both the king and knight, with interesting factors such as the history of the knight and a nifty old move called castling.

I hope you learned something today, may it help you to further improve you wonderful strategies in the good old game of chess. 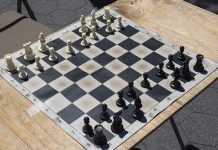 Can a Bishop Move Backwards in Chess? 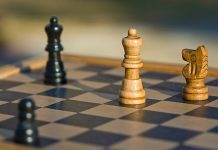 Can the King Move Diagonally in Chess?

How to Play Shuffleboard on Game Pigeon? | Simple Ways to...

Can you Checkmate with Just Two Knights in Chess?

Can a Bishop Move Backwards in Chess?

Battleship Strategy to Sink Your Opponent