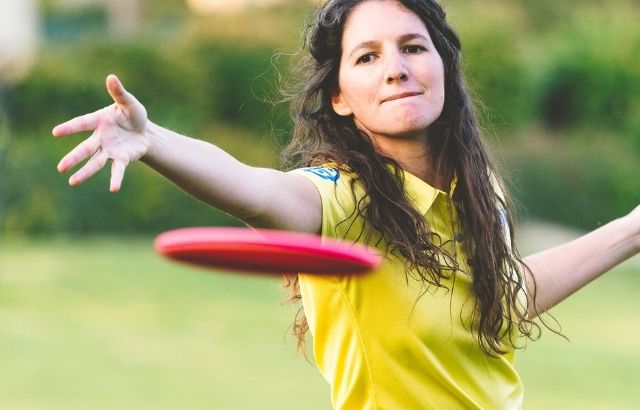 The Disc golf game is quite an exciting sport. Like in every game, we want to have a proficiency, in the same way, we want to have command in this game. Especially in throwing the disc golf driver straight. No person wants to throw the disc golf driver in a curve way. But throwing it straight is everyone’s ultimate goal in this game. In this article, I would try my best to put some instructions and tips about how to throw a disc golf driver straight. If you would apply these tips in your practical game. You will indeed find them beneficent, and you will be glad to see the disc driver going straight to the goal under these instructions.

Why People Seek For Straight Throw?

When you throw the disc mostly, you encounter two main troubles; either your disc becomes understandable and gets tuned in the direction of spin during the high-speed portion. It becomes overstable and gets faded (fall on the ground) too earlier in its flight. That’s why players like the straight throw because we find a little interference of Turn and Fade in the straight throw. By the straight throw, you can easily land your disc at the defined target.

Tips for How to Throw A Disc Golf Driver Straight

You cannot do anything without proper instructions and training. The beginning is always hard, but you can be perfect in anything by practicing it regularly. So you are given some tips below that will guide you in throwing a disc golf driver straight. These disc golf tips for beginners are more useful. If they practice them frequently, and they’ll get mastery over this game.

If you want to throw the golf disc driver straight and want it to cover the maximum distance, you should relax your muscles when playing the game. You’re your muscles are under some tension, then your golf disc, instead of moving straight, will move in a curved way and will not cover a farther distance.

Bend the Wrist at the Accurate Angle

Most beginner golfers make the common mistake of keeping their wrist position at more than 90 degrees with a basket. But this will not drive your golf disk straight and farther. Keeping your wrist at the 90 degrees of the basket will throw the disc golf driver directly and make your disc cover maximum distance. Besides 90-degree wrist position offers you an excellent grip on disc golf.

A Fine Grip on the Driver

It is your misconception if you think that as long as you walk before releasing the disc, it offers you more strength to through this farther. The over-walking can only waste your energy and makes you tired and exhausted. This tiredness will lead the disc to follow a curved path and cover a shorter distance. The proper walkthrough saves your energy and maintains the body strength to throw the disc golf driver straight.

At the time of throwing a disc, your mind must be relaxed from all kinds of worried. If your mind is preoccupied with the other thoughts, it will cause your disc move in the wrong direction instead of moving straight. So be calm, cool, and stress-free while playing this game. The stress-free mind will help involve your mentality in the game, along with your whole body.

After you are well aware of the disc’s proper throwing, the next and most significant part of this game is Choose the best disc driver to throw a disc golf driver straight. It is a very challenging task to choose the best disk drive because, in the market, you may be deceived by some very cheap and low-quality drivers that may affect your game to get a straight throw.

You’ll find plenty of discs in the market with different characteristics. But your choice of disc driver must be as per your style of playing this game. Like many players make a common mistake, they seek for the best quality disc. But it would help if you chose a disc whose characteristic may fit your playing style.

You should carefully judge your preference of characteristics in the disc as per your disc golf throwing style. Then it would be best if you opted for the disc having attributes like speed, weight, and stability that perfectly match your preference. Some players choose a driver that is either over heavy or over light, too slow or too speedy. So your choice of disc driver matters a lot to achieve a straight throw. Don’t be trapped by some low and cheap brands. Choose a reliable brand of disc.

How do you throw a backhand in disc golf?

For the best backhand disk golf throw, first, you need to make your rear arm active for backhand; what helps is to make the rear arm functional, hold the top of the disc when cocked, then move your holding arm backwards and relax. Now keep your spine in a vertical position, keep back foot planted, and bend your front knee. After this position, throw the disc forcefully with the backhand.

How do you throw an Under stable disc?

What is the best weight for a disc golf driver?

The medium-weight disc driver ranging from 167 to 169 grams is thrown for achieving the maximum distance. When disc drivers make turns, it becomes difficult to control those turns. But the lighter disc drivers are harder to get a turn as compared to the more massive disc drivers. So using more lightweight disc drivers in a normal situation will lead the disc golf driver to move straight.

How do I know if my disk is Over stable or Under stable?

The term overstable disc is used for the disc, which tends to be fading up from its direction of spin on its flight soon after being thrown. When an overstable disk is thrown in a flat direction, it gets fade up before following a straight path.

While an unstable disc is quite the opposite of an overstable, which during the high-speed portion of its flight. It tends to turn in the spin direction. Generally, Understable discs possess more glide than overstable.

Most people try to know about how to throw disc golf farther, whether through heavier disc or lighter disc. But the Heavier discs fly a bit little farther than more lightweight discs. Because due to their heavyweight such discs are disturbed by the air motion. These heavier discs are perfect and stable for throwing into the wind. The heavier disc has more air resistance than the lighter disc. It is also the logic of physics that lighter bodies cover the longer distance as compared to heavier bodies.

What weight discs do pros throw?

Which weight of disc do pros throw, whether heavier or lighter, depends on the wind’s condition in which you are throwing the disk. You all know that the lighter discs are best to start with. But this is not always the case, because the medium weight discs are also best when you live in windy conditions. So both lighter and heavier disks are useful for deepening on condition.

Besides, you have to keep a few more things under your consideration like the disc’s weight. Its stability in terms of the understandable disc & overstable disc, fading of the disc, turning of the disc, etc. So these are the factors on which you straight disc throw relies. If you practice the instructions mentioned above regularly in your game. You will find the straight disc throw a piece of cake. After reading this article now you know how to throw a disc golf driver straight.