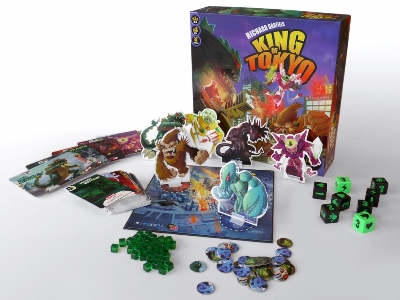 I’ve always been a fan of Strategy games including Chess, Risk, and Catan. Sometimes it’s challenging to find a great Strategy game. There are so many out there with mixed results.

Some strategy games are too complex for the average player and a difficult setup can discourage repeat plays. On the flip side, a game too simple and predictable can be just as easily discarded.

Enter the King of Tokyo– monsters and mayhem inhabit this board game. Created by Richard Garfield (also the creator of Magic: The Gathering), this King of the Hill-style board game is for 2-6 players. The main goal is to use your monster to destroy your opponents or gather 20 Victory points.

The game strikes a nice balance, being easy to play and has enough variation in play style to keep you guessing. Each game varies in time played with an average of around thirty minutes. Some games can be as short as ten minutes!

After reading these King of Tokyo strategies, you might be ready to pick up a copy too! Did I mention there are numerous expansion packs and add-ons? It’s sure to keep the game fresh and interesting no matter how many times you play.

Try to get to Tokyo first and hold the line for as long as possible. Not only do you gain a point for entering the city, but you also gain an additional 2 points for every turn you start in the city.

Focus on dishing out as much damage as possible. In the beginning, most people will focus on gathering Victory points or more boosts for their monster. This is the prime time to get as many Claw dice rolls as you can.

Staying in the city too long puts you at risk for early elimination. You can’t heal with dice, but you can with cards if you’re lucky enough to draw them.

Note: You can leave the city after any turn that you’ve been attacked. The last player to attack you takes your place.

If you’re a real gambler, you could wait until your Health is at three points. Jump out of the limelight, and heal before returning to the fray!

This works best when you’re playing against 3-5 players.

If you have 3-5 opponents, it gives you the greatest advantage to cut into their Health early on. Once you’ve dealt a huge amount of damage to the other players, they will be focused on staying alive. It will be easy enough to keep putting dents into their plans.

If there are 6 players, it is still a viable strategy as the sixth player will occupy the other slot in Tokyo Bay. But the drawback is that you don’t have the attack advantage anymore.

Focus on building up your power through cards. Some cards include the ability to add more Health or even extra turns. These cards can be saved and used at a crucial moment when you’re ready to strike.

Focus on gaining cards that either boost your monster’s stats or boost your ability to gain Victory points, not both. If you spread your Energy points too thin, it will be more difficult to win.

Taking a middle-of-the-road approach helps you stay alive and keep the heat of your opponents off your back.

Once you have enough boosted Health or Attack power, claim Tokyo and wipe out your rivals. If done correctly, you should be able to clear the board in 2-3 turns.

For an alternative strategy, use all of your saved cards to cash in for as many Victory points as you can. You can also stack it with rolling Number dice for added Victory points.

This works best when you have 4-6 other players. With this many other players, it pays off to bide your time and mix your offense and defense.

It isn’t very effective with only 2-3 players. A smaller group doesn’t give you the time to build up your forces and could actually cause you to lose.

When done right, it will keep your opponents on their toes. It also gives you the most control in the game through planning.

The main pitfall is that you will have to switch strategies mid-game if you want to win; gathering Victory points, or Aggressively taking out your foes. Timing is crucial for this to work.

This is also called ‘turtling’ by players of the game. It’s considered the safest way to win the King of Tokyo board game.

It focuses on staying out of the city as much as possible and rolling the dice to accumulate Victory points steadily.

You get three rolls for your turn. Keep the Number dice and discard the rest for your next roll. If you happen to roll two of a kind on your first roll, save those and roll again.

Pay attention to your opponents’ Health and keep racking up points. Draw the least amount of attention to how far ahead you are. If they notice, you might become the brunt of their attacks.

This King of Tokyo strategy can be used no matter how many opponents there are. The drawback is that it’s the most tedious way. If other players notice you never attacking, they might conspire to try and pick you off when you end up in Tokyo. It’s also possible to lose from taking too long to gain points.

Planning a strategy isn’t just what you’re trying to achieve, but also considering what plans your rivals might be hatching. Delaying your plans to ruin their plans can be just as advantageous.

If you’re familiar with the people you are playing with think about how they usually play other similar games.

For example, my sister tends to hang back and wait for everyone else to destroy each other. My best friend tends to go the aggressive route. Using this knowledge can help you craft the best way to both plan and react.

If you’re playing with strangers, it will be difficult to predict the future. If you take time to pay attention to how they play in the first game, you’re sure to have a good counter in the second match. Or if you’re really fast, you can learn your opponents within a few turns.

For example, if you notice that everyone is playing Aggressively, it would benefit you to stay back in a Passive or Defensive way. Likewise, if there isn’t much action, it could be better to take on the Aggressive role.

Be flexible. You can’t control the dice or what everyone else is doing. Being adaptive is the key to winning this game.

When rolling the dice, despite your strategy, you might come to a point where you need to focus on gaining Health or Energy points. A good way to counter this hiccup is to save a Heart or Lightning Bolt every couple of turns. This ensures you always are gaining a few points back while your main strategy is in play.

Although there is never a clear-cut way to win a game, picking a King of Tokyo strategy will give you a solid base.

If you’re a player who likes to get ahead fast– the rush of competition– then the Forever King Strategy might be your best choice.

If you’re a player who likes to play in a calculated manner, or you like to have more control over the events of a match, then the Maxed Out strategy might be your cup of tea.

And if you’re a player who likes to err on the side of caution, then the Slow and Steady method is better for you.

Don’t forget to watch your opponents. Humans are creatures of habit. Once you pin down their strategy, it will be easy enough to figure out how to stomp out their next steps.

Use these diverse strategies to construct your own variations. The more you practice and learn the cards the better chances you have of decimating the competition!

Happy strategizing and may the Best Monster win!