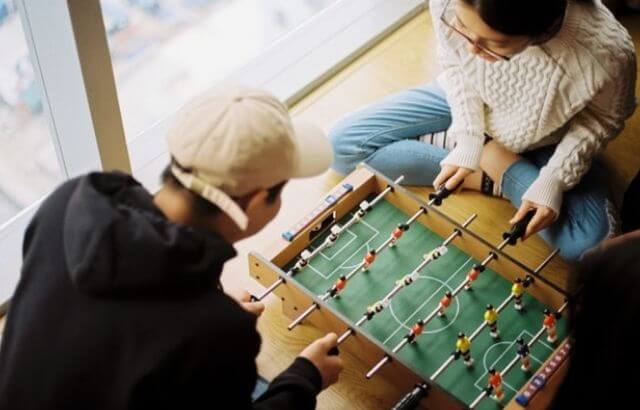 Foosball is a mindful game just like other games; it also has strategies, Foosball tricks, planning, and proper practices. Foosball is identically defined as the smaller sized version of soccer. It’s also referred to as a game of table soccer because of its table design and structure, consisting of a cabinet, a base, and 8 rods with a foosball man, or player who rules the play area. In this article, we are going to learn how to play foosball like a pro.

Before starting this topic, let’s discuss its history of how this game comes? Who invents this joyful game? What motivation encourage him to invent this game? You must know about these questions because you are going to be a Pro. Answer for these questions are here: Let’s go back to 1921 when Harold Sealers Thornton was sitting on his chair and looking at the box of matches to bring a new invention to the world. Yeah, right, this concept came from a box of matches. That time everybody was inspired by a football game. So Harold decided to make something so that people can enjoy in their home while playing foosball, so he named his invention as a “Foosball” because this name is reassembled to Football.

Now, I will go step by step for explaining you how to play foosball like pro.

Playing with the 5-rod is the key where the real magic happens. Therefore, it demands a lot of practice to be a pro.

Tic-Tac pass: For this, you have to be practice with all players in the corner. Spend hours with tic-tac till you can control the movement between any two players. Most of the beginners feel it challenging to play with two players on the base of a tic-tac. The most crucial thing in 5-bar passes is to have control over striker rods.

In 3-Man Striker, the middle players score more goals in the foosball game. From back pinning to front, pinning to all shots needs to be executed here with perfection. A player should have to be practicing control and shooting from a striker rod to be a pro.

It’s a beginner shot in which the natural movements of the players overlap. In this Foosball strategy, the ball is pulled then flicked towards the goal.

There are three pull shots of elements:

Firstly you have to place the ball just behind the bar, secondly, bring the player around the ball and hit it with a snap of the wrist. It’s a basic strategy for how to play foosball like a pro. It seems tedious to go back repeatedly, but you must have to be perfect in basics if you have to achieve your goal.

While playing, when the balls come behind the rod in the right position, your mind will automatically accumulate a sense of how to move it.

One of the essential rules in foosball is you can’t spin rods even if you are playing 1st time.

The term stands as a posture like how a player stands, turns, and bends during a play. But I have a tip you must stand at 45° from the table. This posture will allow you to move quickly as well as help in producing more power.

No matter how you want to play, remember the following prevention:

Before discussing its characteristics, you must be familiar with the term “Foos.”  A “Foos” is when you Stuff the ball into your opponent’s pass and kick it back into the opponent’s goal.

There are two methods in serving Foos:

How do you practice foosball?

Foosball is a game of hand & eye in which you have to predict the opponent’s movement. Every skill in this game is just because of practice. By following different strategies and rules, for more to learn, if you can practice the whole day then you have to do it. It’s not a game of several hours. It’s a recreational game.

What is a Foos in Foosball?

A “Foos” is when you Stuff the ball into your opponent’s pass and kick it back in opponent’s goal.

There are two methods in serving Foos:

Is a goalie shot in Foosball 2 points?

It is officially declared that there is no difference in the points scored, and each goal accounts for one single moment. If you are playing recreationally, then it’s okay if you set goal 2. But if your opponents are aware of the rules, they will quickly shut you down on 1.

Why is spinning illegally in foosball?

Spinning is illegal in foosball in the respective way as it can damage the table and rods too. More Spinning will reduce power and productivity in score goals.

Why do some Foosball tables have three goalies?

It’s must be because it is more challenging as compared to 1 goalie. High regard is given to the players for 3- goalies Foosball.

Can you score on yourself in foosball?

Yes, you can score on yourself in foosball by focusing on rules. But remember that you can’t score a goal from kick-off. If you still do it, the ball will be considered invalid, and you have to restart the ball.

What can I use to lubricate a Foosball table?

Is snake shot legal in foosball?

A Rollover shot is a snake shot where you have to use the middle man, which pins the ball towards the opponent’s goal.

Can you score with the five men in foosball?

If the ball is legally in play, you can easily score with 5-man any time. Off the serve, the ball has to touch two men before advancing to the next shot.

Are you allowed to spin in foosball?

No, you are not allowed to spin.

To summarize, I hope these techniques, rules, and tips will help you in your game for this purpose, must have to do the excellent practice. I collect selective information to achieve your desire score goal through which you can be a champion and now you know how to play foosball like a pro.