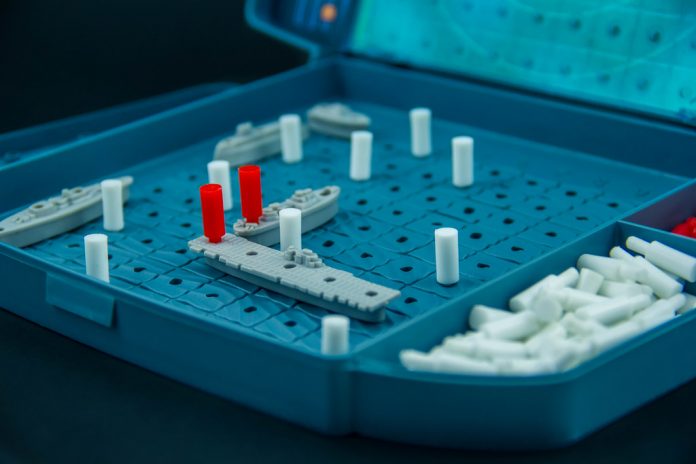 Battleship is an exciting classic board game with a hide and attack format that keeps you guessing until the last ship is sunk. With two key elements to the game, it makes you wonder which aspect of play is more strategic: the offense or the defense. While to an extent Battleship is a game of chance, there are decidedly some strategies for both parts of the game, but here we’re going to dive into the best approaches for defending your fleet.

Some of the best strategies may surprise you, such as avoiding placing your ships in the four corner squares, while others may seem obvious, such as putting some space between your ships. When it comes down to it, however, the best tactics for eluding your opponent are to use a mix of placement tricks and change up your game to remain unpredictable.

“You sunk my battleship” was a phrase oft-repeated in my childhood home. Back in the day, Battleship was a go-to form of amusement on those hot summer days. During the sweltering afternoon hours, my sister and I would face each other from either end of the couch and carefully place our ships on the board to see which one of us would emerge the victor.

Even now, Battleship has stood the test of time. A quick game with my youngest son can keep us entertained when the weather isn’t at its best. With a few key defensive tactics, we can keep it fresh and fun.

Ship placement is the biggest decision you need to make when playing Battleship and it can be challenging to know where to lay out your ships for the best advantage. There are many configurations to consider, but each placement has its own set of pros and cons.

Putting your ships too close together can be dangerous. With this layout your opponent could easily locate other ships trying to sink the one he originally finds. But how much space is optimal?

Placing two ships where they connect can make it easier for your opponents to find ships more quickly. Should ships be touching?

Locating your ships in the center of the board can be perilous. Certain areas are more commonly guessed than others, so this can make or break how quickly your opponent can locate and sink your entire fleet. What placement areas on the board make your ships easier to locate?

Having your opponent find your longest ships early in the game can be a disadvantage. Since ships have different lengths affecting how difficult they are to locate and sink, are differently sized ships best suited to varied strategies or should the same tactics work for all the ships in your fleet?

Read on for the best ship placement practices and to see how a muti-faceted defensive strategy can help you achieve the most consistent victories.

Despite the chance element of the game, there are some defensive elements that you can use to give yourself the upper hand. Deciding where to place your ships is a key part of a winning strategy. The best way to utilize these tips is to combine a few of them every time you play. With several options to choose from, you have an arsenal of approaches to mix and match for a formidable and dynamic fleet setup.

When on the hunt, players tend to guess hits first in a horizontal pattern. Placing more of your ships in a vertical position can make it take longer for your opponent to find and sink them.

According to a survey of 1000 Battleship players conducted by onlinegambling.com, the four corners squares at A1, A10, J1, and J10 are some of the most commonly guessed squares. Avoid placing your ships on the corners when using the outermost squares to give you an edge.

3. Place at least one ship on the outer edges of the board.

Avoiding the corners doesn’t mean you can’t utilize the rest of the border squares. Statistically, the edge squares, except for the corners, are some of the least guessed spots on the board. When you put an outlier ship in this area, it can throw off your opponent’s hunting strategy. This works especially well if only one of your ships hangs out in the border waters away from the rest of the fleet.

4. Orient your ships in different directions.

Don’t have all of your ships horizontal or vertical. Mix it up and your opponent will have a harder time deciding which direction your ships are facing when they make a hit. The less visually pleasing your configuration, the less predictable the placement will be.

5. Avoid the center of the board.

The probability of getting a hit by guessing in any given square is higher the closer you get to the center of the board according to the Washington Post. This theory encourages opponents to attack toward the center of the board. By placing your ships elsewhere, you can counteract this style of attack. You could also exploit this statistic by placing only one ship in this area to convince your opponent that the remainder of the fleet is very nearby

6. Leave a large section of the board empty.

When attackers are on the hunt for your ships, they will tend to assume that there has to be a ship somewhere in an area where they keep missing. This will delay their hits, giving you more time to find and sink your opponent’s fleet. This can work especially well when combined with tip #5, avoiding the center of the board.

7. Have spaces between your ships.

When ships touch, your opponent can happen upon an additional ship while taking shots at the one she originally found. Spreading them out with at least one square between all of your ships can be an advantage. Opponents will often assume that there isn’t be another ship so close to another and may decide to hunt in another area of the board.

8. Place two of your ships touching side by side.

This is to say that two ships are parallel to one another with no squares in between them. Wikihow suggests that this could confuse your opponent as to which type of ship they have hit, giving you an opportunity to get in a couple of extra shots while she is figuring out which direction the ship is oriented.

Avoid placing your ships in mirrored positions on the board or putting them all on the outside perimeter. Humans love visual balance, so these layouts are somewhat predictable and many attackers will try guessing symmetrical squares to try for another hit.

10. Place your ships in a tight grouping.

This is another angle of leaving portions of the board empty. Having your ships close, but not touching, can frustrate your opponent by making it harder to discover a ship by using the checkerboard hunting method.

11. Place your smallest ship in the middle of a large open area.

It will take longer for your opponent to find it which gives you more opportunities to get some hits of your own. This could frustrate your opponent even more if you place that tiny destroyer near the center, convincing them that there are others nearby.

Whatever ship placement strategy you decide on, mix it up or you may find that your opponent is onto your game secrets. By using different combinations of tips 1-11, you can pull together ever changing placement plans that will be difficult for recurring opponents to deduce.

We’ve discussed a lot of options to consider, so let’s recap the strategies for placing your ships in a condensed cheat sheet.

With this shortlist of tactics to get you thinking, you’ll become a more consistent winner in no time. Just keep in mind the final strategy: be unpredictable. This is the most important advice you can use, and with so many possible strategy combinations, you’ll be keeping your Battleship opponents blindly guessing game after game and scratching their heads in frustration. Can a knight move backwards in Chess? What is a Walkover in Tennis?

Can a knight move backwards in Chess?

Complete Clue Strategy: How to Play and Win Every Time