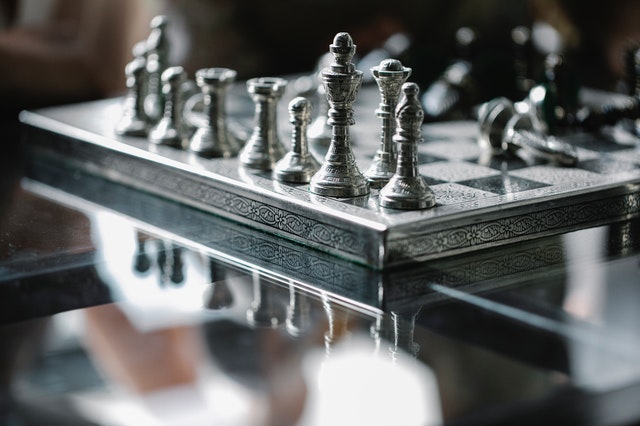 Yes, the king can capture an opposing queen, although this is no easy feat. The king may only capture the queen if not placing itself in check.

As the king moves only one space at a time, the king is not likely to initiate the capture of a queen. More likely, the queen will be captured following an error move by an opponent.

The king and queen are two of the most important pieces on the chessboard. The game revolves around the first piece, and the second piece is the most powerful in the game.

In this article, we will discuss exactly what the moves of the king and queen entail, and why these pieces are so crucial to game play.

We will also discuss other interesting moves, such as the King and Queen’s Gambit, and look more into the topic of today: can the king capture the queen?

Let’s check it out!

The King (and Queen) and I

I am likely not the only person whose favorite piece is the oh-so-powerful queen. This piece has the power to move in just about any direction, and no piece has quite as much fury as a feisty queen on a mission.

When playing chess, one of my go-to strategies is always to develop a side pawn as quickly as possible, in an attempt to reach the home turf of my opponent’s pieces. Why? Well, the only thing better than one queen is two.

Queening a pawn, next to placing your opponent in checkmate, is just about the most satisfying feeling in chess!

If you’re already an avid reader of this site, you’ll also know that I’m a big fan of the stately king. Although this piece moves with the leisure of an old man walking about his kingdom, the entire game revolves around the king; which makes it pretty powerful in my book.

So, imagine when these two powerful pieces clash. Is this even possible, or will the world of chess implode or cease to exist as we know it?

Plus, if this clash were to happen, whose side of my very favorite pieces do I choose, the king or the queen? Spoiler alert, the king is always your top priority!

But wait, I’m getting ahead of myself. I’ve done all the homework on our favorite two pieces (yes, I’m assuming they’re now your top choices in pieces too) so that you don’t have to.

Read on, become wise, and think of this treasure trove of a chess website the next time your opponent asks you: can my king capture your king?

Meet the King and Queen

Ah, royalty. Some love them, some hate them, and some love to hate them (or hate to love them?). When it comes to chess, there are few pieces as powerful as the conquering king and always-on-a-quest queen.

Here is everything you need to know about these crucial pieces

How does the king move?

The dignified king moves one square at a time either vertically, horizontally or diagonally.

Think of the king as an old ruler, walking about his kingdom in a stately manner and likely with a cane for assistance. This piece loves to take its time!

And with good reason. If the king were as powerful as the queen, imagine how quickly the game would be over. We imagine that the inventors of chess were looking for something to pass the time, and having two extremely powerful pieces just wouldn’t cut it.

Not that two queens aren’t a possibility on the chessboard, but a bit more on that later.

How does the queen move?

The queen, who is worth nine points, is the most powerful piece on the checkerboard.

This piece can move horizontally, diagonally or vertically, and can do so continuously as long as no piece is in its way. In short, the queen is a valuable piece that you do not want to lose!

A brief history of the queen

Unlike the powerful piece that we know and love today, the queen was not always this powerful.

History shows that the piece was originally named a prime minister, counselor or a vizier.

And those powerful moves that the queen has today? Nope, they weren’t there either! The queen could only move one space diagonally. We dare not think of these dark days.

The evolution of the queen as we know her today, according to chess historians, started in Spain when Isabella I of Castile  ruled. Her power influences fans of the game to make the queen equally powerful.

The rest, as they say, is history.

Now, the queen might be able to move pretty much as it pleases, but there is one piece that even the queen cannot imitate: the jumping and fast-maneuvering knight.

The mighty knight is the only piece that can jump over other pieces, including a queen, in an attempt to attack its enemy.

Wouldn’t it be lovely if the mighty queen could also jump over anything it pleased? Just imagine the utter chaos. But alas! Think of the queen as a stately dame who must never embarrass themselves by jumping in public.

Can the King Capture A Queen?

Yes, the king can capture other pieces and that includes the queen, although this scenario doesn’t often happen. It will usually happen when one player blunders their queen or when a player sacrifices their queen for a checkmate.

The most important rule of chess is that a king must never be placed in check (which could lead to checkmate). As the king only moves one slow square at a time, and also captures one square at a time, it is unlikely that the king would be able to start an attack on the queen.

Of course, the king could try, but by doing so the piece would likely put themselves in check, which is an illegal move.

However, this scenario does occur, but only when an opposing player moves their queen to a spot that they did not see is threatened by a king. If the king is in no danger after capturing the queen, they may capture the piece.

When moving your king, it is always essential to triple check that it is safe to do so.

Technically, a player could have nine queens in total (eight promoted pawns and an original queen). However, this scenario is highly unlikely to occur.

In addition, you do not have to already have lost a queen to turn your pawn into one. It is possible (and quite beneficial) to have two queens on the board at the same time.

Related: Can a King Capture the Opposing King?

Though that the king doesn’t have a few tricks up its sleeve? Think again!

There is one instance in which a king can move more than one space at a time, and it;s called casling.

Castling refers to when a player, within their home rank, moves their king two squares towards a rook. The rook then moves to the square that the king crossed.

This move comes in handy when you need to protect your king from incoming threats. Furthermore, this move is more beneficial when your king remains behind a wall of pawns for a bonus layer of protection.

The rules of castling

A king cannot always castle. Here are the rules to remember when you or your opponent attempt this move.

Now that you know the ins and outs of castling, add it to your strategy arsenal and see how your game improves!

Why is the King so Weak?

You dare call the king weak! Just kidding, this piece does move pretty slow, and even I have wished that it would pick up the pace.

As previously mentioned, the queen is a powerful piece, as basically a rook and a bishop combined. To put it in perspective, the queen is equal to nine pawns (and there are only eight pawns on a board).

Now, imagine this type of power times two. Havoc! It would be the stuff that Game of Thrones plot lines are made of, with every second game ending up like the Red Wedding.

Thus, the king is a calm leader that motivates its army from home ranks. To allow for longer and fair game play, it moves at a glacial pace (no one tell Miranda Priestly, you know how that ‘thrills’ her!)/

Why is the Queen so Powerful?

Interestingly, the queen wasn’t always the oh-so-powerful master of mayhem that we know and love today.

Initially, this piece could only move one square at a time, and was called a prime minister, counselor or a vizier. We know, it’s tragic just thinking about it.

It wasn’t until the rule of Isabella I of Castile during the late 1400s that chess players were inspired to give the chess piece more power. It is likely that the people of Spain were inspired by Isabella’s reign, and the new method of using the queen spread to other chess-playing countries.

Queening is that utterly magical moment when your pawn reaches the eighth rank (the row closest to your opponent) on a chessboard.

To reward this little piece’s hard work,  it may be promoted to a higher rank of the same color, like becoming a queen.

This move is referred to as queening. When the pawn lands on its final square of the last rank, it is immediately swapped for a higher ranking piece, such as the queen.

In formal games, an arbiter must give the players an extra queen to use as the new piece. In informal or friendly games, it is acceptable to turn the pawn on its head to symbolize a queen.

What is the King’s Gambit?

The King’s Gambit entails when a white pawn is offered as a sacrifice to eliminate black’s central pawn.

White can then develop quickly and attack the opposition’s king.

This set of moves dates back to the Romantic Era, making it one of the oldest chess openings still in use today.

It is essential to know as many chess openings as possible. Not just if you are playing, but also so that you can recognize which openings your opponent is playing, and then counter these openings.

What is the Queen’s Gambit?

No, it’s not just a hit Netflix series!

Similar to the King’s Gambit, the Queen’s Gambit consists of three moves.

This is also one of the oldest chess openings still in use today. It allows the white side to quickly develop their strongest pieces.

A king can technically capture a queen, although this does not often happen unless your opponent mistakenly moved their queen to a threatened position. In addition, the king is never likely to start an attack towards the queen, as they would likely place themselves in check by doing so.

In this article, we discussed the importance of both the king and queen on the chessboard, and how both these pieces are essential in your checkered arsenal.