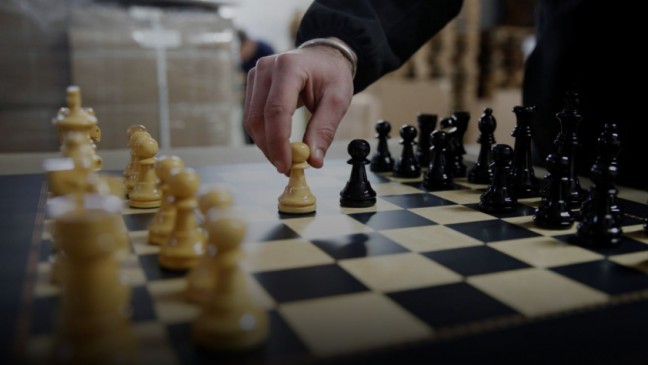 No, a pawn cannot move backwards. It can move straight forward one square at a time (or two if it is the pawn’s first move). A pawn can also move forward diagonally when capturing a piece.

Pawns are commonly known as the weakest pieces on the chessboard, but in this article we’ll discuss how pawns are much more valuable than you think, and how to best use them to your advantage.

We’ll also discuss interesting moves such as chaining your pawns, queening your pawns or using the En Passant move. By the end of this article, your pawn just might be one of your favorite new pieces.

Little pawn foot soldiers, this one is dedicated to you!

Pawns Are The Soul of Chess

“Play the pawns well; they are the soul of chess: it is they which uniquely determine the attack and the defense, and their good or bad arrangement determine if the game is won or lost.”

As a young chess player, I remember reading about the chess greats (with the hope to learn something in the process!). This quote by Philidor always stuck with me.

As chess players, we often hear about the wonderful pieces on the board and all their strengths. The queen can topple just about anything, and have you ever seen a rook on a mission? Something standing in your way? The mighty knight will hop right over that.

Even the king, who has just as little moves to its availability, is more valuable than the mediocre pawn.

Yet, here is a world-class chess master and he believes that the pawn – no matter how small to some – is one of the most important pieces on the chessboard.

Since seeing this quote, I have a new respect for pawns. Instead of not really worrying about what happened to the pawn, I started implementing pawn-related strategies. I saw them as equals to all the other pieces on the board.

And guess what? My game immediately improved! Pawns or princes? There is so much to learn about these valuable foot soldiers.

How Does a Pawn Move?

Think of pawns as the foot soldiers, also named a farmer, because they work so hard.

Vice versa, a black pawn on F7 has the option to move to F6 or F5 on their first move, but after that they are only allowed to move one square at a time.

Can a Pawn Move Backwards?

No, a pawn cannot move backward, only forward. It can move one square forward at a time. That is, of course, unless it is the pawn’s first move. In which case it has the option to move two squares forward.

Related: Can a Knight Move Backwards in Chess?

How Do Pawns Capture?

All pawns capture diagonally, no matter which color they are or where on the board they are.

Pawns are not able to capture enemy pieces that are right in front of them, For example, if two pawns were to oppose each other on E3 and E4, they would be in a deadlock, until one of the pawns are removed by a third piece (such as a rook, bishop, knight or queen).

If a pawn, however, was on E3 and an opponent was on F4 o4 D4 (both diagonal to the pawn) it would be able to capture these pieces on that move.

The photo above shows the possible movements of a pawn. The arrows show a pawn moving forward without capturing a piece, and the x’s show a pawn capturing a piece. To clarify, pawns can only capture one space diagonally, but they can capture multiple times which allows them to travel multiple files to the left or right.

Can a Starting Pawn Move and Capture?

We know we said that pawns can move two squares on their first move, but these moves must only be forward. This means that a pawn has three possibilities on its first move:

A starting pawn can not, for example. Move one square forward and capture to the side on another square during the same move.

Here’s a scenario: if an enemy pawn is on H4, a white pawn on G2 cannot move one forward to G3 and capture the enemy diagonally on H4 during the same move.

Can a Pawn Move Diagonally?

Yes, but only when capturing an opponent. When simply moving forward, a pawn can only move one square at a time, or the choice of two squares if it is their first move.

Let’s simplify it. A pawn can only move forward. Unless it captures an opponent, then it moves diagonally. It can not move sideways, backwards or jump over other pieces.

Pawns: More Valuable Than You Think

Although pawns are often seen as the weakest piece on the board (they are, after all, only one point), they prove to be more valuable than many players consider.

When you think about it, pawns make up half of your chess pieces. They are, therefore, valuable in their masses, and should be played with caution and tact.

Imagine an opposing piece invades your home ranks. Immediately, if played correctly, they are met with a strong opposing line of pawns. Sure, these foot soldiers can be captured, and everyone knows that a knight can easily jump over a pawn. However, this at least gives you the chances to get your other pieces battle ready.

It is important to use each and every pawn as the crucial part of your battalion that they are.

Pawns love to stick together. We get it. As little guys, they need as much help as they can get!

When playing chess, it is rarely a good idea to send a pawn off on its own. Not only will it likely get stuck or captured, but without other pawns protecting your ranks, it will be easier for opposing pawns (and other pieces) to start their attacks.

So, when playing a game of chess, remember how valuable the pawns really are, and remember to use them in groups.

OK, use pawns in groups, got it. Uhm, how exactly do I do that?

A pawn chain is an easy game strategy that can end up making a huge difference in your defense forces. To make a pawn chain, you simply move your first pawn forward two spaces, and ensure that your next pawn protects the first.

For example, if a white pawn was to move to H4, the next pawn can be moved to G3. That way, the pawn on H4 is protected from opponents.

Well, not entirely protected. An opponent can still choose to capture the pawn,

But then you can capture their pawn in return with your backup pawn.

We just love a plan B!

Promotion: A Pawn At Its Most Valuable

Think a pawn is a minor piece in the grand picture of chess? Think again, because if your little foot soldier makes it all the way to the opposite side of the board, it can be promoted to a higher-ranking piece.

That’s right. Need another queen? Your promoted pawn has got your back. Perhaps an extra bishop or knight would help? Get that pawn moving and watch as it becomes more powerful.

The term “queening” is usually used to refer to the process of promoting a pawn to a queen.This process happens on the same move as when the pawn lands on its final rank.

En Passant: What It Is and How To Use It

Chess used to have a rule that you could move a pawn only one space at a time. You would then see pawns moving slowly towards each other. The pawns could then make contact and the battle would start.

Player’s concentration, however, seemed to decrease. They couldn’t wait this long for pawns to start the battle, so they added the rule that pawns can move two steps at a time.

Passed pawn or not passed pawn

A passed pawn will always have an opponent, meaning it won’t be able to cross the board and become a queen. For this reason, the rule of “capture in passing” was introduced, where a pawn could capture it’s opponent as if it had only moved one square.

Very important: this rule is only valid for one move. You can’t realize after two moves that a pawn is next to your own, and decide to capture it in passing. Your counter move has to be directly after the opposing pawn moves two spaces.

Be a courteous player

Were you unaware of the En Passant rule? You are not alone, as even many seasoned players are often unaware of this interesting rule.

For this reason, it is considered courteous to agree on playing the En Passant rule with your opponent. This way, they aren’t caught off guard if they were unaware of the rule. Plus, they won’t think that you’re cheating, which is also a bonus.

Although a pawn can’t move backwards, it is still a valuable piece in any chess player’s arsenal.

Pawns can help build a strong defense against opposing pieces, and gives a player the opportunity to strategies.

From its ability to use the En Passant rule to the joyous occasion when it is promoted to a queen: a pawn should never be underestimated.