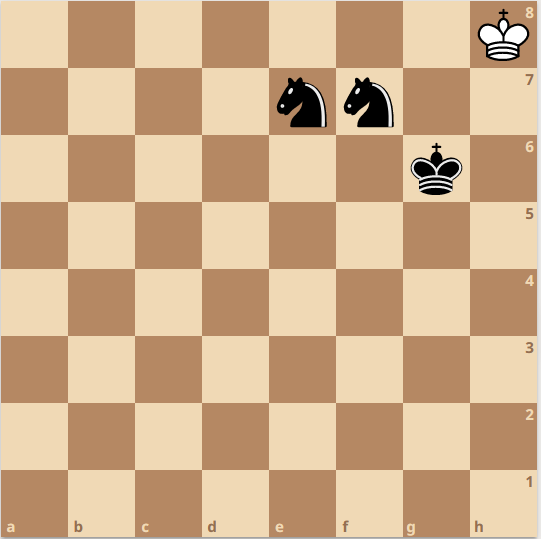 Knowing what to do in the final stage of a chess game is just as important as having control in the beginning. While many strategical themes found in the middle game still apply in the endgame, fewer pieces on the board can make the game play more challenging. Many unique endgame scenarios can have you questioning your skills. Being left with a board that makes you wonder if you can checkmate with two knights is one of them.

Two knights in an endgame offer an immense advantage. Unfortunately, this advantage doesn’t always guarantee a victory. In some instances, you’ll have to shake hands and call it a draw, but when you play with a two-knights endgame in mind from the start, you can sway the board pieces to achieve power.

To checkmate with two knights, you’ll require strategic game play throughout. Luckily, you only need to keep a few basic rules and pieces in mind to achieve this.

Growing up, the game of chess has always fascinated me. I remember brief lessons while attending a prestigious private school in my 4th and 5th year. Although I only have the memory of basic gameplay, at the time I believed I would become a chess grandmaster if I continued to practice. A quick move back into the mainstream education system left me out of the game, and encouragement to further my play faded.

Fast forward into adulthood, and my interest in chess was rekindled. In a recent game I found myself asking if a checkmate with two knights is possible. My mind often wanders to shocking final moves during attempts to regain and improve my long-lost skill of demolishing opponents. While my gameplay is limited to online sites and strangers, the urge to learn more playing strategies is strong.

After many late-night conversations with players around the globe, extensive digging, and exhausting arguments on chat forums, I have been able to summarize the important points surrounding a two-knights endgame. Though rarely encountered, this endgame offers an exciting play, and when mastered, a glorious victory!

Studying it requires patience and playing it even more so. Generally, checkmate with this strategy can require up to 115 moves, which will lead to a draw during competition by the R50 rule. This should, however, not stop you from using it during friendlies or online games.

Below, I divulge the details.

The Power of the Knights

Knights are special. Because they can jump over other pieces, they provide powerful and unique tactics that can blow your opponent’s mind. Besides this, they’re also the only chess pieces that can move in an L shape. Unveiling the mysteries of a knight can put you in a position of power. Below, I share some tips for playing with this impressive piece:

Can You Checkmate with Two Knights?

The simple answer is yes, and no.

Above is an example of checkmating with two knights, however you cannot force your opponent into a position like this.

If you’ve heard that an ending game with two knights results in a draw, your sources weren’t wrong. Two knights can’t force checkmate against a lone king. The superior side can only force a stalemate, and when this happens, neither side wins, and the game ends in a draw. According to chess tradition, the stalemated player’s only next possible move would be suicidal (and often illegal), effectively ending the game.

When the board is left with two knights and a lone king, the king can simply be moved into a position where it can’t be checkmated. In a situation like this, the defending side will always have another safe position available when they play strategically. If they slip up, and you’re able to force the king into a corner square, you’ll achieve a checkmate, but this rarely happens.

However, when the opposing king remains on the board with other pieces, the two-knights endgame comes into play. In this situation, the knights can force checkmate by gaining tempo as the other pieces are moved.

How to Play the Two-Knights Endgame

Troitsky, a Russian theoretician, studied the two-knights endgame in detail. He concluded that once the defending pawn is blockaded by a knight, no further down than what is known as the Troitsky line, the defending side loses no matter where its king is positioned.

If the defending side has more than one pawn, a two-knights endgame can still be played in some scenarios. To successfully play this, all pawns should be captured except one. Once one pawn is left, you can proceed with the two-knights endgame to checkmate the king. However, setting up a blockage against four connected pawns will be challenging, and five or more pawns can generally win against two knights.

It’s impossible to checkmate with two knights versus a pawn if you don’t put the Troitsky-line rule into play. No matter where the king is positioned, you’ll win the endgame if you blockade the pawn no further down than the Troitsky line.

The Troitsky line rule was composed by Alex Alexeyevich Troitsky. To this day, many consider him one of the greatest chess endgame composers. John Nunn, an English chess grandmaster, analyzed the Troitsky-line rule and stated that it was astonishingly accurate.

In play, the border-lines at which you should block the pawn to execute a mating attack is as follow:

How to Avoid a Defeat by the Two-Knights Endgame

If you want to avoid checkmate or stalemate by the two-knights endgame, you should remember one important rule: avoid the corner and edge squares!

On the other hand, always leave a couple of moving squares available to the opposing king if you want to prevent a draw by stalemate.

Since this stalemate happens quite frequently, you should pay close attention to it. Knowing which positions to avoid (either for yourself or your opposition) will help the end-stage run more smoothly and allow you to play with more confidence.

Understanding the limits of a knight and the value of an opposing pawn is vital if you want to master the two-knights endgame. While it’s uncommon to checkmate with two knights, it’s possible.

When playing for this endgame, you should keep the disadvantage of a lone king in mind throughout the game. A king and two knights versus a king and a pawn are ideal for this end-stage. Also, remember to avoid stalemate positions and ensure that you block the pawns no further down than the Troitsky line.

With enough practice, you can execute a mating attack with the two-knights strategy within 82 moves. If this endgame fascinates you as much as it does me, try experimenting with and studying different movements for this play. Figuring out a less-than-50-move checkmate with two knights could have your name written down in history!