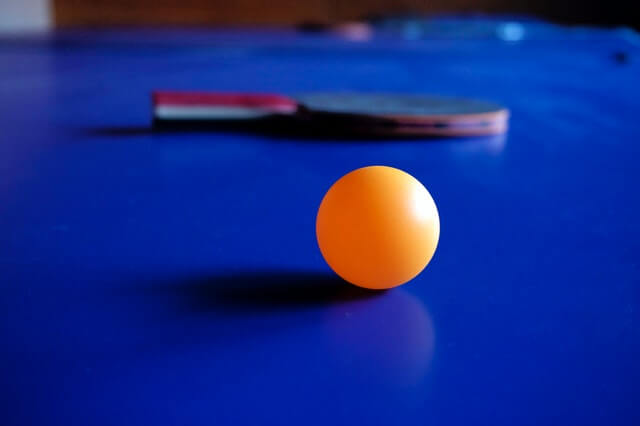 How much does a Tennis Ball Weigh? It is a general question, and many tennis enthusiasts usually ask this question. Before answering this key question, let’s briefly introduce this game. Tennis is an outdoor or indoor game played by two people (called singles) or four people (doubles) on a rectangular court. A racket is used to play the ball back and forth across the net. The game’s purpose is to score by hitting the ball so that the opponent cannot successfully knock the ball back.

The game’s origin can be traced back to the Stone Age when humans first used their clubs to hit stones back and forth across dirt and stone roadblocks.

When dropped onto concrete from a height of 100 inches (2.5 meters), they must bounce upward from 53 to 56 inches (135 to 147 cm). The serve is the most significant action in tennis. There is no weight limit for the racket, and it is usually strung with elastic gut or nylon. The court’s surface can be grass, clay, or hard material like concrete, asphalt, artificial turf, or wood. The court’s surface is a crucial element in tennis because the ball bounces higher or lower, faster or slower, depending on the surface of the court. There is a tendency for the ball to slide on clay, while harder surfaces are ideal for quick start and stop.

The weight of a tennis ball may be crucial to the performance of a tennis player. The best tennis machines also require precise calibration to receive only the best-balanced tennis balls and throw them out at a specified speed and thrust. Also, most professional players choose to use the ball machine for single training, because they can enjoy the freedom and agility it provides.

What Is The Correct Weight For Your Ball?

According to the International Tennis Federation, the tennis ball weighs 1.97 to 2.09 ounces (56 to 59.4 grams). It is believed that tennis was first played in Birmingham, England, in the 19th century. Since it was first launched in 1890, the rules have remained mostly unchanged. Find more details about its origin here. The tennis racket was initially made of wood, and the string was made of animal intestines. Over the years, significant progress has been made in making them stronger and lighter, usually made of metal and titanium.

For significant tennis events, the tennis ball will be painted yellow, and for regular matches, tennis balls must meet specific size and bounce standards. The only allowed colors are yellow and white. Typically, for professional games, fluorescent yellow is used, which has been the tradition since 1972 as it makes the ball more clearly visible when viewed on TV.

As mentioned earlier, an ordinary tennis ball weighs 56 to 59.4 grams. It is a solid structure filled with compressed air that can provide sufficient speed when it comes into contact with a tennis racket. Also, this interaction with the player accelerates the tennis ball to an unprecedented level, and due to its contact with the net or court ground, the tennis ball’s speed is further reduced.

For writers and professional players worldwide,

The correct tennis ball weight has never been such big news, but some overweight tennis balls have caused severe problems for players. Many of them suffered wrist pain due to the need for more strength to hit the ball away. Also, an overweight ball has difficulty reaching the opponent, thereby making it stop on the net many times, which reduces the quality of the game.

As for the ball machine, a more massive tennis ball can cause severe damage to its throwing part. It can also make the storage tank to be easily overloaded and hinders the natural movement of the balls to the pneumatic cavity. In the pneumatic cavity, all balls are thrown at a definite speed and pace. Tennis machines are expensive to purchase and require proper maintenance. It is why it is vital to only use the correct type of tennis ball with the correct balance and weight.

Furthermore, there are knee and hip joint problems associated with lighter tennis balls. Many players who try to cope with long distances made by these light balls get injured when they use their knees and hips to stretch and eventually hit the ball. A lighter ball also easily misses its route and can be found outside the tennis court. This is why a tennis ball with the right weight and a good balance must be considered before a big game.

What Results Will A Tennis Player Get When Using The Wrong Type Of Ball?

Using the wrong type of ball when playing tennis may also affect the life and quality of tennis shoes. Outsoles in close contact and rubbing against the ground are mostly affected by using the wrong type of tennis ball. When using a lighter tennis ball, the speed will increase, and the distance the player needs to cover will be longer. This creates a severe demand for running and stopping, which intensifies the frictional impact on the outsole and also puts a lot of pressure on the shoes.

Not to mention, the midsole and heel areas are also affected by this. Since it takes more jumps to reach the tennis ball, the shoe’s geometry will change dramatically after the wrong ball is used in the first game. Many players would require a complete replacement of their tennis shoes after a wrong ball type is used, and as long as the impact problem is not solved, significant pain can be felt from the heel and the curved area of ​​the foot.

The other tennis equipment affected by the wrong ball weight is the racket of the tennis player. When you hit the ball, you will take more pressure from the ball, thereby losing the ability to predict the increase in pressure. It is not uncommon to be unable to use the racket again after playing with a tennis ball of the wrong size and weight. Moreover, as mentioned before, the tennis ball machine is an essential part of the tennis player, and the wrong type of ball severely damages it. The motion system may lose its air pressure and lose the ability to throw it at a certain speed. This can be extremely detrimental to the quality of training.

The tennis ball’s internal feed may also be damaged because the wrong size tennis ball may cause jams that have never been seen before. This is why weight plays a vital role in the success of tennis matches and the tennis ball machine’s life.

How Much Does a Ping Pong Ball Weigh

In addition to learning about the general definition of ping pong. You also need to understand the official regulations governing its weight. Interestingly, players usually spend a lot of time (and more money) to choose the right table tennis racket. But completely ignore the chance of getting the right ball. If you are playing around, you can play with cheap balls. But if you are interested in improving your game, you need the right ball to work.

The table tennis ball weighs 2.7 grams, which is the weight required for the Olympic Games described on the Table Tennis Masters website. It is hollow, made of celluloid, and filled with gas. Table tennis is usually white or orange and is sold according to a three-star rating. Three-star balls are of the highest quality and are used in the game. The ball’s mandatory diameter for table tennis matches is 40 mm. It is the diameter specified by the International Table Tennis Federation in 2000. The ITTF believes that bigger and heavier balls will slow down the pace of the game. It makes it easier for TV viewers to follow the game.

In conclusion, tennis matches are one of the most popular racket sports in the world. One player can compete against one person, or two players can compete against the other two players. Millions of people play tennis all over the world, and the sport has millions of fans worldwide. As mentioned earlier, many people tend to ask, “How much does a Tennis Ball Weigh?” The answer to this can also be found in this article.