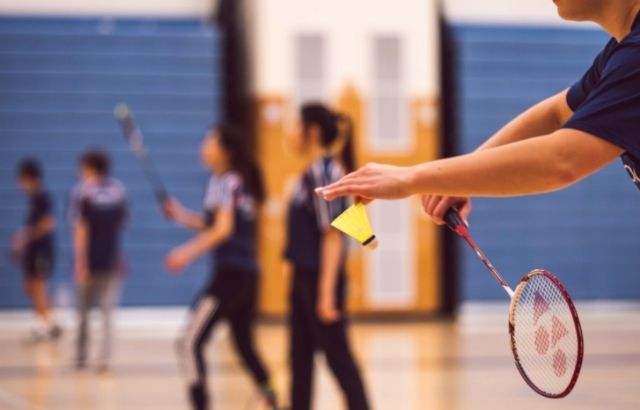 “Is badminton a sport or a game?” is the question frequently raised by the people living in a continent other than Asia where they know a little about Badminton. Many people don’t consider this game a sport because of their misconception that it is simple to play, needs no effort or energy, and needs no particular place to play (can be played anywhere).

But on such lame behalves, no one can denounce Badminton to be a sport because many factors prove Badminton a perfect sport. Badminton is the most popular, enjoyable, and energy-demanding sport. Like other sport, it also requires players with high techniques, energy, and fitness. It requires almost the same energy and effort while playing the game as other sport games demand. In the early years, Badminton was presented as a social game. Later on, it evolved and became more athletic.

How It Is Played

Badminton is a racket sport in which two or four players deal with a shuttle using a racket in a court with a net in its center under some rules of Badminton. The Net in the middle of the court divides the area between two teams. Here every team tries to avoid shuttlecock from hitting the ground or Net of their side.

Origin and Evolution of Badminton

If we trace the Badminton’s origin, Badminton’s history tells that it initially originated in the form of a game without a net known as “Battledore and Shuttlecock” it was highly played in ancient Greece, Japan, China, and India. During the early 1800s, the Net was included in Battledore and Shuttlecock, and this sport started to be called Poon. During the 1860s, British Army officers in India formulated some Badminton rules for these games. Gradually this sport used to be played for the amusement of the English upper class. In 1873, when Badminton’s sport started to be performed at Badminton House, Gloucestershire, England, it was given Badminton’s name by the Duke of Beaufort’s estate, keeping the general instructions t established in India for Poon.

Factors which Make Badminton a Sport

The following factors include some characteristics that we usually find in every sport. These factors contribute to proving Badminton a sport and give an answer to the question “is Badminton a sport.”

Your success in Badminton lies in your proper technique, body movement, and footwork. The badminton players have to run in every corner of the court of his side, whether the frontcourt area, mid corners, or backcourt area. The expert opponents always shot the shuttlecock in the area of your weakness, but if you are technical enough, you can instantly reach the shuttlecock in any corner of the court.

Badminton is such a sport that requires intense use of energy to continue the game until the end. As the number of shots increases, the requirement of calories to be burned also increases in this sport. An average match requires at least 25 to 30 shots to be concluded. In international games, this may reach up to 100 or even more—besides, players with heavyweight demands more energy to be consumed. So your stamina will decide how long you will stay in the game.

Your mastery in this sport also depends on how instant you react to an opponent’s shot. In Badminton, the shuttle is shot with such a high speed that you have to react towards the opponent’s shot in an even millisecond. So within that short time, you have to decide about which direction to shot back the shuttle. Besides, you also have to maintain your shot accuracy and footwork in that sort period.

In Badminton, those players are successful who enter the ground with some planning. Your strategy and techniques must be according to your opponent’s level, like how attacking, defensive and deceptive he/she is. You must collect some information about the strengths and weaknesses of your opponent before the contest. If you don’t know about your opponent, then try judging him in the initial rally. The best tactic and impression is your high confidence to put your opponent in frustration and make him make a mistake.

The shuttlecock used in the Badminton is very light (around 4.75 to 5.50 g). It’s quite challenging to maintain the accuracy of hitting such a lighter object because the air may change the shuttle’s direction after being shot. So you have to be very technical to make the shuttle travel on your defined path.

The best factor that makes Badminton a sport is that it is part of the Olympic event. The Olympic event includes all the sports games, and Badminton was included in it in 1992. So Badminton’s inclusion in Olympic is the firm proof of its being a sport.

Badminton is quite a more accessible game to play. It is said that “it is easy to learn, but hard to have mastery.” The same is the case with Badminton; it is easy to pick for beginners as they don’t have to face the formidable player and take it as fun. Badminton becomes problematic when you cross the intermediate level of playing because as long as you pass the levels, you need to acquire more techniques to face more competent opponents.

Is there money in Badminton?

There is no money at the start of this game, but different academies start offering you sponsorships when you reach the mid-sized tournament. They also pay you some amount of money. The local tournaments don’t pay you a significant amount of money. Still, you will get a good income at the stage when you become a professional badminton player start winning prizes in big matches. The more you gain popularity in this sport, the more you will earn money.

What sport is Badminton similar to?

Badminton was invented long ago in ancient Greece and Egypt. Initially, it was called battledore or shuttlecock and was played by the upper class in the 17th century. After some time, it was given the name badminton.

Is Badminton a girl sport?

No, badminton sport is not confined to female players only, but it can be played by both gender, whether male or female. The male players can have more mastery of this sport than female players because of the difference in energy level.

Is Badminton a challenging sport?

No doubt badminton is a challenging sport when you are playing it on a professional level. You need to be highly technical at the professional level like you have to develop proper footwork, the shot’s accuracy, body energy, and other tactics to face your professional opponent.

Can I start playing Badminton at 23?

There is no particular age for playing Badminton. Whether children, teenagers, adults, or elders, people of all ages can play this sport. If you want to play professionally, you need to be experienced enough to face different levels.

What is the old name of Badminton?

The Badminton was invented with the name Battledore or shuttlecock; later on, it was given the name badminton. Later on, another name was also shown in India before Badminton that was Poon.

For a long time, Badminton was not considered to be a good sport for many people. Instead, it was considered as only a simple, undemanding, and light game. Anyone, including children, can play it or a game played anywhere irrespective of any particular court. So it has been frequently asked a question that is Badminton a sport?

The factors above prove it a recognized sport, especially after being included in the Olympics event in 1992. Badminton is one of the oldest sports globally that all people play, whether children, elders, women, men, or even handicapped persons. This sport has become so popular that several courts and halls have specialized for badminton performance worldwide in the last ten years. Not only for live matches but also for the further promotion of this sport, lots of areas for the training of top contestants have been settled. Hope you got your answer on is badminton a sport or a game.