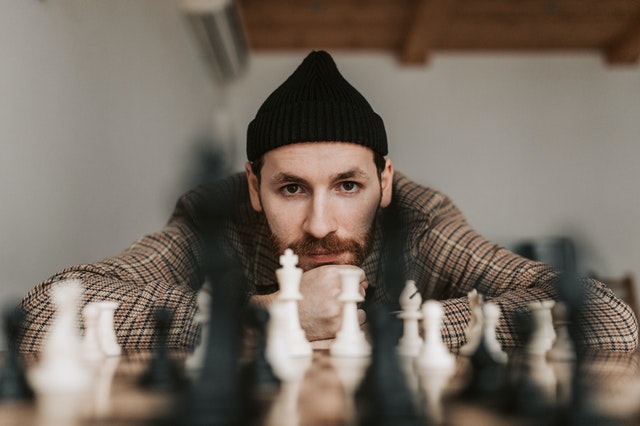 Although one of the ‘smallest’ pieces on the chessboard (the tiny pawns are only worth one point each), pawns are not to be underestimated. As the great chess master François-André Phillidor once said: “Pawns are the souls of chess.”

Seriously? Well, think about it. Pawns may only be worth one point each, but with a total of eight foot soldiers on your side, they are the definition of strength in numbers. Furthermore, pawns are placed in front of other important pieces for a reason: protection.

As you can see, pawns are more crucial than you might think, which is exactly why we have no problem dedicating multiple blog posts to this little trooper.

In this article, we’ll discuss all you need to know about the pawn, from how it moves and captures, to interesting moves like queening.

Well, what are we waiting for, let’s chat all things pawns!

The Pawn I Adore

Look, let’s not beat around the bush. The pawn is a puny piece on the chessboard that’s disposable, right?

Wrong! Not that chess players who believe the above are alone. I used to think exactly the same way, until an opponent told me: “You really should take better care of your pawns.”

This comment was after I had lost a game, so obviously I wasn’t interested in what the player had to say (hey, we’ve all been sore losers at one point, right?). But then the comment got me thinking: was I misusing my pawns? Could they help me improve my game?

Fast-forwards a few months, and books like Pawn Structure Chess, Pawn Power in Chess, and Dynamic Pawn Play in Chess  had found their way to my bookshelf. And yes, it turned out that I was highly undervaluing the pawn and its potential.

I won’t lie and say that the pawn is now one of my favorite pieces. I mean, have you seen the queen and rook move? But I do cherish the piece a lot more, like you would appreciate your brother or a pet goldfish.

I love sharing this fondness of the pawn with other chess players. Imagine my excitement when I saw a fellow tournament player wearing a badge that says: “I heart pawn stars.” Seriously, there’s an entire fandom for pawns, and these foot soldiers totally deserve it.

How Does the Pawn Move?

The pawn is a humble foot soldier that moves one space at a time. This move is only one square forward. The only time that a pawn moves diagonally is when capturing an opponent’s piece, but we’ll get to that in a sec.

However, to make things a bit more interesting, a pawn is allowed to move two spaces forward on its first move. This allows a player to develop their pieces at a quicker pace.

Keep in mind that a pawn can only move two spaces on its first move. Even if a pawn moves only one space forward on their first move, they may not move two squares at a later stage.

So, use those two moves while you can!

Can a pawn move backwards?

No, a pawn is the only piece on the black and white board that can not move backwards.

For this reason, it is important to carefully consider how you will move your pawn. Once your pawn move is made, you cannot change its path (unless capturing a piece).

Can a pawn jump?

If another piece is in the pawn’s way, it will unfortunately be blocked from moving until that piece either moves or the pawn is able to capture another piece diagonally.

The only piece that can jump over other pieces on the chessboard is, as you may know, the knight.

The only time a pawn would technically be able to jump over other pieces is if it was promoted to a knight. But then (again, technically) it would no longer be a pawn but a knight. Ah, my brain is burning!

So, final answer (and no, I don’t want to phone a friend), a pawn cannot jump over other pieces.

How Does the Pawn Capture?

Although the pawn moves forwards one square at a time, it captures other pieces by moving diagonally one space to either its right or left.

Here’s an example for reference:

Another scenario may be if a white pawn is on D5. If an opposing pawn is on E6, the pawn can capture it. However, be aware that the white pawn may then be captured by the black pawns on D7 or F7.

If black pawn is on G4, it may capture opposing pieces diagonally to H3 or F3. Again, it should be aware of opposing white pawns who might still be on G2 or E2. It wouldn’t want to be capture only to be captured!

When moving your pawn, always check (see what I did there) that it is safe to do so. Be on the lookout for opposing pieces who might capture your pawn and put your remaining pieces in danger.

When is a pawn not allowed to capture?

As previously mentioned, a pawn cannot capture another piece if this piece is not positioned diagonally to the pawn.

Furthermore, the pawn can only move one square at a time, including diagonally. Thus, a pawn cannot capture a piece that’s positioned two spaces away diagonally. Don’t mistake the humble pawn for a bishop!

Always remember that, no matter how fond you are of other pieces, a king remains the most important piece on the board.

So, when moving any piece, including the pawn, you should always consider whether this is to the benefit of the king.

If your king would be in check as a result of you moving a piece, this move is not allowed. You must then re-do your move and ensure that the king is safe.

Can a pawn capture on its first move?

Yes, a pawn can capture an opponent on its first move.

A pawn is only able to move one square at a time, or two spaces forward if it is the pawn’s first move.Due to this foot soldier’s slow progress, it won’t always be possible to capture an enemy’s piece, as the pieces will still be too far away on home ranks.

For example, if a white pawn from D2  moved to D4 as the opening move, there won’t be any pieces on the board for the pawn to capture.

Let’s say a white pawn is on D4, a black pawn can move from E7 to E5, but it won’t be able to capture the pawn on D5, as the capture will have to occur in a second move. In fact, the pawn will be in danger of capture from the white pawn on E7 instead.

As you can see, it is nearly impossible for a pawn to capture on its first move.

How a pawn captures on its first move

Imagine a white pawn on E2 never moves during the game. Let’s say it’s protecting its king. Then, from the enemy ranks, square C8’s bishop is en route to attack your king.

Pretend that the bishop eventually ends on F3, diagonally to your pawn on E2 (which hasn’t moved at all). In this scenario, the pawn can capture on its first move.

When does this rule apply?

This rule is applicable to any pawn on the front line, as long as the opponent piece makes the capture possible. If a pawn has to move to get closer to its opponent, it will be able to capture the piece, but it won’t be on the pawn’s first move.

It’s not necessary to get too technical. As long as you know that a pawn moves one square at a time (except two on the first move), and that it captures diagonally, you’re sorted.

Don’t think that you can move your pawn from F2 to capture a pawn on G7 in one move. Your opponent would likely fall off of their chair from shock or laughter.

What is Pawn Promotion?

Ah, pawn promotion, the bright light at the end of the slow-moving pawn tunnel.

Think of pawn promotion as the literal promotion of your pawn if it reaches your enemy’s home ranks. To encourage pawns to keep going, they are promoted to a higher-ranking piece when they reach the home soil of enemy grounds.

Once the pawn reaches the end of the board, it is promoted to a higher-ranking piece. When a pawn is promoted, a player usually switches it for a queen, which is called queening.

However, a pawn can also be promoted to a rook, knight or bishop. The only piece it cannot be promoted to is another pawn (because a pawn can’t move backwards and would just be stuck at the end of the board), and a king, for obvious reasons.

The rules of pawn promotion

To answer your question, yes! A pawn can capture on its first move. If a pawn never moves during the entire game, it can capture an opposing piece that has made it all the way to the pawn.

Throughout this article, we discussed all you need to know to make the most of your pawns, including how they move and capture.